How do people get this smart?

I visit a number of blogs that use quotes as part of the postings.  I always enjoy reading them.  But on occasion, I read something that  makes me pause.  Here are a few that I thought worth passing on.  What do you think?


"Success is walking from failure to failure with no loss of enthusiasm."
Winston Churchill
Here is a man I admire greatly.  He really did "walk his talk."  I believe greatness exists within each person but is often hidden or not tested.  For Mr. Churchill, he was tested on the world stage with his country's future hanging in the balance.  I bow to such greatness.

"When you are going through something hard and wonder where God is, remember,

the teacher is always quiet during the test."
Unknown
This quote speaks to me personally.  I have felt exactly this emotion in caring for my mom.  I still feel it now at times, but the real test was the last few years of my mom living with me.  I hope God was paying attention then and recognizes that I did the very best I could during the hardest test of my life.


This last quote is a bit long and there is some controversy as to its source.  But regardless of its authorship,  it is worth a read.
"A democracy is always temporary in nature; it simply cannot exist as a permanent form of government. A democracy will continue to exist up until the time that voters discover that they can vote themselves generous gifts from the public treasury. From that moment on, the majority always votes for the candidates who promise the most benefits from the public treasury, with the result that every democracy will finally collapse due to loose fiscal policy, which is always followed by a dictatorship.

The average age of the world's greatest civilizations from the beginning of history has been about 200 years. During those 200 years, these nations always progressed through the following sequence:

Ok - if that last quote/thought/reference (whatever) doesn't scare you a little bit, then you haven't been paying attention to what is happening in our own "great civilization."

Email ThisBlogThis!Share to TwitterShare to FacebookShare to Pinterest
Labels: quotes

Through My Caregiver Eyes: The "Stuff" of life

Two years since my mom left my house for good - to move to Rehab and then to Assisted Living.

While mom lived here, she had a small suite of rooms: a private bathroom, a bedroom and a den.  She squeezed the stuff of her life into those rooms.  She was happy to do so because she had the things that mattered to her - and the security of living with family.  She had her "stuff" ... and everyone needs their stuff.

During her 5 years with me her stuff remained constant - never growing, never shrinking. She wasn't a spender and really needed little.   But other elements of her life shrunk and declined.  Some loss of independence, reduced ability to manage her small responsibilities, loss of driving, and finally declining health.  Eventually she even lost her ability to live with family.

Well I kept all her stuff just as she left it in her rooms for awhile.

Eight months after she moved, I decided to sort through her belongings and repackage them so that they fit snuggly into her bedroom.  It was time to reclaim the den for our use.  I downsized for her: for example she wouldn't need a Forman Grill, or craft supplies that her arthritic hands no longer could manage, or that mountain of papers she tucked away like a squirrel hiding nuts.  The downsizing was hard because it was an acceptance ...  she would not be returning. Still I kept her bedroom unchanged.  I couldn't seem to let that go.

After a year I removed the Chair Lift off the stairs.  It was a trip hazard for my husband who has limited vision ... and with mom not here, it served no purpose.  That was another small heart ache for me.

Now on the 2nd Anniversary of her life in Assisted Living - I decided to reclaim her bedroom.  Fortunately we have space in the lower level of our house to store her things.  But they no long reside in her room.  Her room is no longer "her room."  I have spent several nights boxing up her stuff and carrying it downstairs.  While that act has made me sad, it is not the worst.  Her total belongings have reduced to the size of one closet - exactly one closet of "stuff" left from a long life.  Her bedroom furniture will remain.  I downsized and packed away small stuff but not big stuff.

I know this sadness is mine alone.  Others may not understand my feelings.  Even mom wouldn't understand because she neither wants nor remembers any of these things.  In fact, the few things I brought to her Assisted Living room she did not want displayed.  It was like she had no plans to put down roots in that place.  Her roots were in my home and now they are in boxes.

The "stuff" of life can bring joy or sadness - even if the stuff isn't yours.

So I am fighting to focus on those things that aren't "stuff."  Her Thanksgiving was filled with family  - not things in boxes.  I fight those sad feelings since I can't control this decline and loss.  It is just a normal part of life.  I focus on "being there" for her. 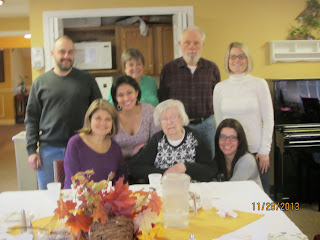 Here she is with her family on Thanksgiving when we all gathered together to watch the parades and to share a Turkey Meal.  It was not home but she really enjoyed the visit.

My home will always be your home despite the fact your legs will never carry you into it again.  You will always belong within the loving arms of your family.  Your stuff is just stuff.  Your real achievements are the great family you built and supported over the years.  You are much loved.  There is nothing else that matters.