It took me awhile to find a child's sweater for my niece's baby due in March.  Searching took a lot of time.  I finally settled on Wee Envelope by Ysolda Teague.  It looked simple to do and speed to the finish line was an important consideration.  Then I hunted for the right yarn.  I hunted only in my stash because I just have so darn much!!  I like acrylic for small children's items.  I know the knitting community favors wool even for children ... but the reality is that working mothers already have their hands very full.  Acrylic is wash and dry.  Easy peasy!!  And Caron Simply Soft has a very nice acrylic and I have a bunch in various colors.  So I hunted and nothing seemed quite right ... until I saw this multicolor in shades of rose.  The yarn is called Ambre and the color is called Rosewood!  I bought this yarn probably 10 years ago on deep discount so it was deep deep stash yarn.

I love the colors. 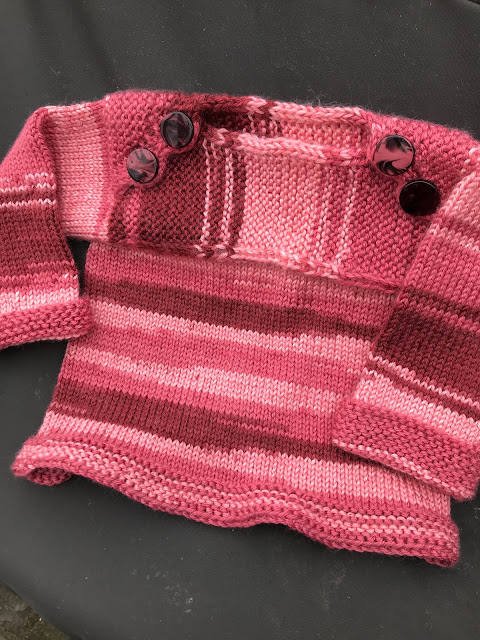 This yarn never found a project because although I love Caron Simply Soft and I love this color called Rosewood - the long runs of color seemed to be a challenge.  The sweater had to be simple enough to not detract from the color changes but not so simple as to be completely boring.

So I took a chance - with a short turn around time for finishing - and began the sweater in Rosewood. As I worked on it - I ran "hot" and "cold" on if it was turning out ok.  The sweater was worked from one cuff to the other cuff - and the body picked up at the bottom of the yoke and knitted down to the hem.  It had an interesting yoke construction.  And the designer had 'picture support' on her web site to help those who didn't understand the written directions for the yoke.  I was one of those who needed help.

But the big challenge were the colors and the way they switched.  I was worried that it was too busy, too much emphasis on the colors ... just too much of everything.  I stopped working on it several times.  I considered ripping it out and starting over in a solid color.  Something safer, where the pattern gets a chance to shine.

Then I decided to complete the sweater and give it to charity.  I would buy a gift for this new baby. To finish it I needed buttons.  The buttons I finally settled on I overlooked at first.  They weren't striking as they sat on a white card.  At some point I found these - but I kept looking.  I wasn't exactly what I wanted but it was something.  I took them to a bright light in the sewing section - and put them against the sweater.

The color in the buttons seemed to pick up the colors of the sweater as you moved them.  They are sort of pearly so as you move the sweater, the button colors seem to slide between the dark and swirly colors in the sweater.  It is hard to catch that in still photography.  But take it from me ... they are perfect. 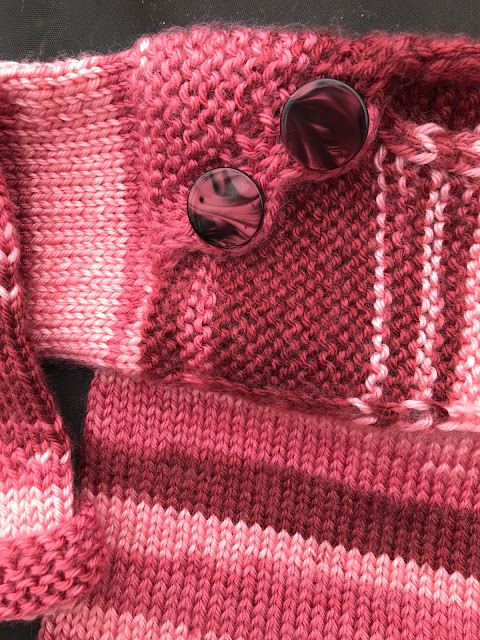 For a busy sweater with busy buttons,  it seemed to work.  I sewed them on before I finished the body.  Glad I did.  The more I worked with the sweater ... the more I loved it.  One of my knitting friends suggested that I get baby jeans to go with it.  Brilliant!!


All that self doubt, and starts and stops, all gone.
Because of buttons.

They are
"Rescue Buttons."

And, yes, the sweater is going to my niece's baby girl!!  Now I need to go get jeans for her!!
Posted by Retired Knitter at 7:20 PM

Email ThisBlogThis!Share to TwitterShare to FacebookShare to Pinterest
Labels: knitting

I am so happy this is going to the original person. What an adorable sweater. I agree with you about the buttons. They are absolutely perfect.

I think you matched the perfect yarn with the perfect pattern! And those buttons! They were made for that sweater. So cute. Well done!

So pretty. Great job. Jeans would be perfect with it.

Super cute! So glad you didn't donate this one - I bet it will be darling on the baby :-) My go-to baby sweater is Elizabeth Zimmerman's Baby Surprise Jacket. I usually pair it with the Leafy Accordion hat. It's been a hit every time.

Oh, the whole thing is terrific, and the buttons just made the outfit. I will have to see if I can find that around here, I am sure a few more skeins of yarn won't be noticed... Cough... ;)

Since I'm not real crazy about pastels or typical "baby" colors, I think this sweater is absolutely adorable. Looks like a designer piece from an ultra-expensive New York boutique!

And I think it's very wise to not use wool for a little one's garment. Ease of care for busy moms, of course, but my own daughter was allergic to wool on her skin from the get-go and I wouldn't want to put any other little one through that!

Very pretty and I love the colors.
That is the yarn I use for the baby blankets I make.

I related to your issues as you knit this sweater. It turned out really cute and I love the pearly swirl in the buttons! I agree that little baby jeans would look perfect with this.

I think it turned out just wonderful, and I like the way that yoke buttons so there is plenty of room to pull the sweater over baby's head.