I don't post much about the animals in my life.  Not sure why that is.
There are some wonderful pet soul mates in my past and
present.

But these past 6 months definitely belong to my cat Wallace,
Wally for short.

At 13 years of age we consider ourselves luck to have had Wally that long.  He started out life with his brother, Max - Maximillan. We adopted them together, wanting a bonded pair.  After years and years of 4 previous cats at odds with each other, we wanted the next set to be peaceful.

I think these boys are the best looking of all our cats over 50 years.  The first two weeks we had them, we spent $2,000 to get them healthy.  Shelter cats typically come with various problems and we were committed to giving them a fair shot at life. Wally was underweight and ill due to lack of nutrition. During that time I had to force feed him.  His brother Max was 'the dude' in charge - he ate first and didn't care who else was hungry.  Max was a sweetheart, but food was his God!  Wally was docile and waited his turn to eat!  Once we got this pair in our home and discovered the situation, food was abundant for both.  But old habits die hard and Wally continued to defer to his brother.


For 3 years things were great.  Wally was always "second banana" to his brother, but we kept tabs on that relationship and no one ever suffered.  But at 3 years of age, Max was diagnosed with degenerative kidneys - a common condition for cats, but way too early in his young life.  Between prescription food ($$$$) and subcutaneous fluids (injected under the skin of his ruff) every other day ($$$$) we kept Max alive for another 8 years.  He died at 11 years of age from kidney failure - finally.  But for such a long life, he should be in the Records Book somewhere!  When vets hear Max's story they are astonished.  "Unheard of" ... is the frequent comment.


So that is the back-story of the two brothers.

Now we were down to 1 cat - Wally.  Initially we worried that he would pine for his brother.  Nope!! No pining here!!  In fact he actually flourished.  He was no longer the second banana.  Wally was loving and happy now that he was the star of this household!!

In August of 2019 - 4 years later - when it was discovered that he was hyperthyroid - another common condition for cats.  Over the course of the last 6 months we struggled with medication at various strengths and appetite problems.  We tried a large range of prescription foods and grocery store food.  All efforts cost many dollars.  But this guy is family so we plowed on as we did for his brother.

Getting food into him was the greatest challenge.  I had visions of my force feeding sessions with him as a kitten. Finally his eating trickled down to almost nothing.  Was it his thyroid meds or was it is teeth.  We moved forward with the dental and they discovered the probable cause of his loss of appetite.  His teeth were a mess.  After the cleaning, we took him to a recommended Vet dentist - where we were told his poor gums and teeth were not the result of improper care - but a condition called Tooth Resorption.  His body was "reabsorbing" his teeth - breaking them down right to and into the root.  When cats in the wild get this condition they starve to death because they cannot eat.  It is an internal process separate from regular tooth care.  And he was in a lot of pain as you can imagine.  But, typical of cats, he never showed that.  Just couldn't eat.  Not showing pain or illness is a survival technique for cats in the wild - they don't want to become prey!  Cats are only partially domesticated and predators by nature, so it all fits together.


The total visit with exam, X-rays, surgery costs, recovery costs, extraction of 8 molars, injectable meds for pain and antibiotics ... (drum roll ... ) was close to $1900.  Did we wince at that cost??  Absolutely not.  He is now comfortable - eating soft foods - and returning to good health.  We hope to have him for many more years.  He is a fabulous cat and we love him dearly.

Non-pet folks I find don't understand our willingness to do whatever we can for our pets.  My response is that pets are family.  If you look into those eyes, how can you not see a beautiful 'soul' staring back at you? 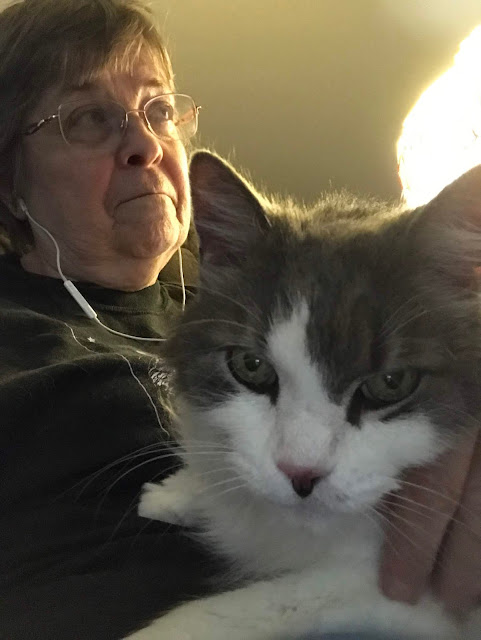 Pets 'give' more than they 'take.'  And if good health and a quality life after treatment is possible - I will do it no matter the cost.  If they are in pain and treatment will not fix the cause - like with cancer - we painfully and sorrowfully say goodbye to them, release them from their pain, and give them back to God.  We have done that 9 times and it never gets easy!  But for now this beautiful creature belongs to me.  He hopefully has many more years ahead of him.  Now that he has those pesky teeth out of his mouth, he can enjoy living again. 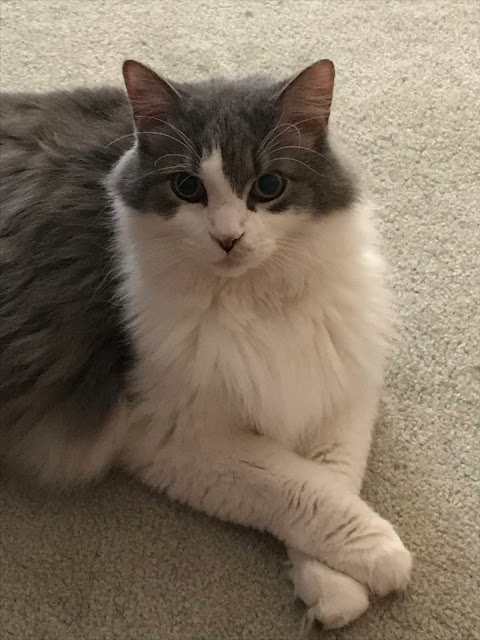 My husband and I have lived with one or more cats our 50 years of marriage.  I think life would be less without one of these graceful and independent animals! 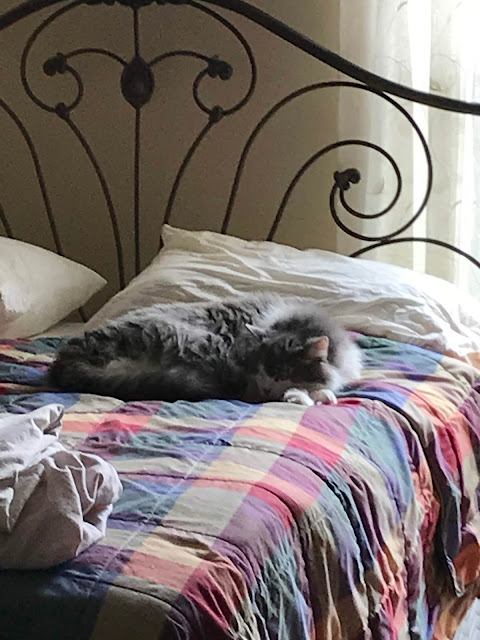 Rest on my dear Wallace.
You have earned your place in our home and hearts.
Posted by Retired Knitter at 1:00 AM

Your pets are lucky to have such dedicated owners. I would love to have another cat but with one son who's now allergic to them and another that visits with two retired greyhounds it's not going to happen.

So happy to hear Wally is doing so well again! You are great pet owners. As you know, I am of the same mind, my pets are part of my family. The house always feels empty when we are without one!

So happy to hear Wally is doing so well again! You are great pet owners. As you know, I am of the same mind, my pets are part of my family. The house always feels empty when we are without one.

God bless you. You are a wonderful fur parent. I feel the same way about our pets and have spent copious amounts of money over the past 40 years to keep each pet healthy. I too, would do it all again. Max was blessed as is Wally to have found your home.

What a wonderful post. I can tell Wally is a real sweetheart. And so fortunate to have you for humans.

We've had cats of all personalities too. Never boring. Riley would actually prefer to be an only cat, and often lets the other know. Sam loves everybody, but he's a space invader! Never minds taking over somebody else's spot (humans included!) Our two girls absolutely refuse to get along. They take great delight in ambushing one another. Unfortunately, it's not in fun. They're serious. So I know what you mean about wanting cats that get along!

How can our pets not become part of our families? Wally is such a handsome fella. And now he is comfortable and happy, too. The only time we've decided to not spend more money on one of our dogs was when they were in pain and it reached a point where it couldn't be helped. So glad to hear Wally's story has ended on a happy note.

I was afraid I was going to end up in tears (again) reading about the loss of yet another beloved pet; so glad this one was a success story. Forlornly and impatiently waiting for when we can get our next companion animal....

I think there is some intelligence or soulful presence inside our family grand-dog too. Pets enrich our lives so much.

Wally is a beauty. I hope you have many more years with him.

Back in the 1980's one of my friends had a cat that was going to need some kind of treatment to the tune of $800 (I think it was that price, but I don't remember exactly). Her mother was appalled at the price. My friend said to her mom, "We would pay it if it were you." Just 4 legged family.

BUT . . . she is our ”love” and we respect, trust completely in our vet and practice.
If bringing an animal into your home, they are like family,
and in our house they are treated with great care.
Just like you feel Elaine . . .

What a wonderful post. Wally is such a beautiful boy. And I agree wholeheartedly! I had adopted a bonded pair of boys, too, with Kramer being the tall, skinny, outgoing one and Slimbo being the tubby, second fiddle. When Kramer died, I thought Slimmie would be heartbroken. NOT. He has flourished and is so affectionate and lovable.

Yes, I can see how much of a love that one is. I have had cats all my life (big surprise...), and I know I have been lucky, most of them have been pretty healthy. Of course, we seemed to be the dumping ground for cats... Sigh.

I love when I see people taking good care of their pets. We too consider our cats to be part of the family. We worry about them and invest our time, money and all we can for them for they give us pure love back.

You're right when you say non-pet people don't understand. I am a non-pet person. Sorta. Growing up my family always had dogs, but dogs were outside creatures. Back then people didn't bring the dogs into the house and domesticate them the way they do now. They went hunting or fishing and stayed in the back yard. Different times. In my early married life I ended up with a cat, not by choice; but my SIL is a huge animal person, mostly cats back then. And sorta forced me to take this cat cause she had too many. We did become attached. But, since she had been an outdoor cat, she still spent the bulk of time outside, but returned in the evening. After several litters and trouble finding homes for all her kittens, we had her fixed. She lived long, maybe 13 years and looked very similar to yours...with the long hair...super fluffy. Her name was socks and the vet told us she was mostly an Angora...are yours? They look it. I must say I enjoyed having a cat far more than a dog; but am also happy not to have pets now days. I do think they can provide lots of company for people. Thanks for sharing your story. I actually had no idea there were dentist for pets. You're suppose to learn something new each day, and thanks to you I have.

Max and Wallace are truly beautiful cats. I'm glad Wallace is on this end of his problems and will, hopefully soon be good as new.