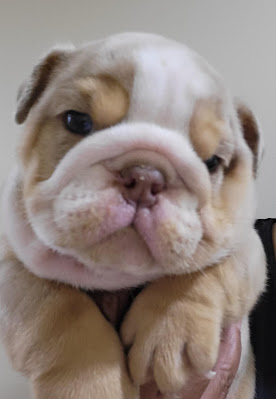 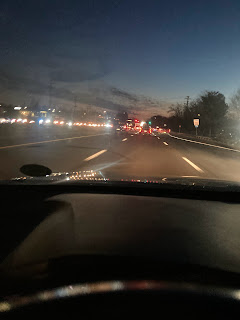 It began the night before with me driving down to my daughter’s condo in DC.  This is a drive I have taken hundreds of times to pick up Milo, her previous dog, that we lost last July.  But this was during rush hour, it was dark and the traffic patterns were a bit different because of rush hour, and I haven’t driven in city traffic in 8 months. This trip is about 30 miles away - and mid-day it would take me about an hour, but this night it took about 90 minutes.  Just the state of traffic in our area. 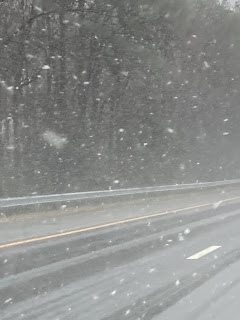 The next morning we traveled through snow and high winds.  Fortunately we were traveling south and driving out of the storm. 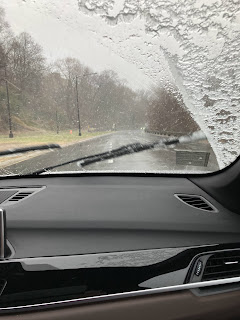 At some point it was just rain.
We knew the storm was still hitting our area and we would need to deal with it on our return trip, but ... 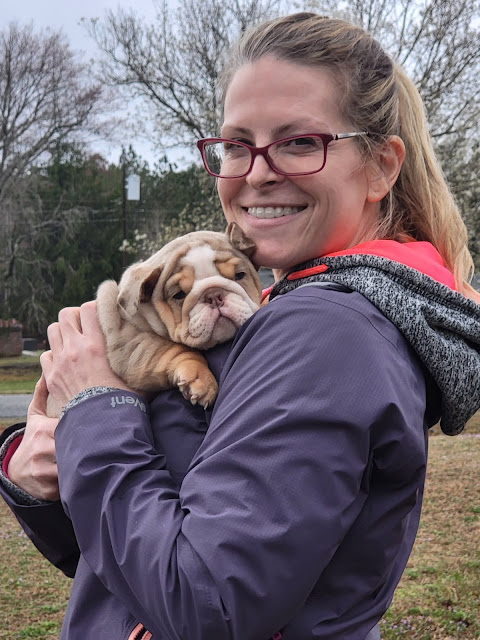 At the end of the road was this wonderful joining of pet owner and puppy.  And what a darling he is.
We spent a short time getting his paper work and some initial instructions ... and then we turned right around and began the 3 hours trip back home. 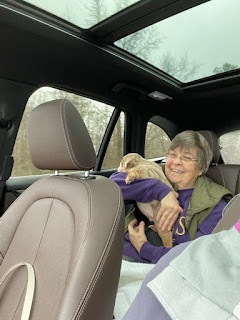 I had some serious bonding time with him in the back seat - and when he wasn’t sitting on my lap, he was looking out the window.  Everything was new to him.  He didn’t sleep a wink on the trip home. He was on an adventure. 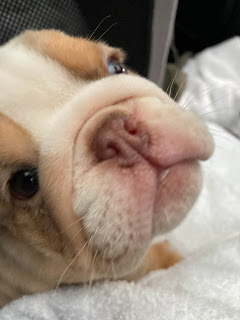 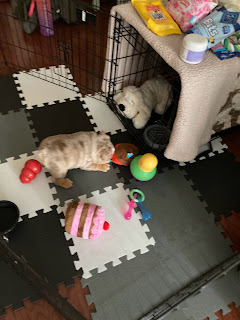 Arriving at home my daughter had set up his crate and his play area - with toys aplenty!  He was so cute running around and enjoying it all. 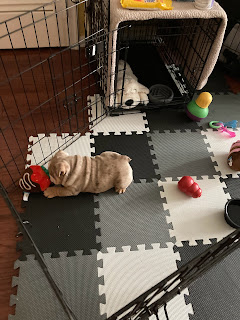 She purchased a very important ’toy’ - a stuff white dog, with a heart beat you can feel and a heating pad insert that lasts 24 hours.  He sleeps on or beside it all the time. 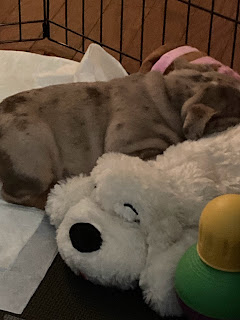 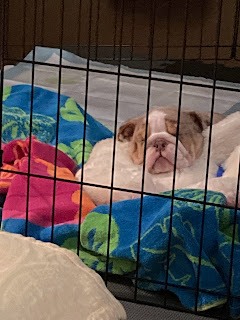 She even purchased a quilted jacket for him because the weather was so cold over the weekend and he seemed so cold outside, but the jacket was kind of big and the weather is now improving and he clearly had an opinion about wearing his new jacket.  The face says it all. 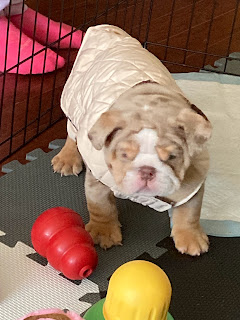 What Tate doesn’t yet understand is that he will want for nothing!  He has landed in a family who values their pets as especially important family members.
Welcome to the family little guy.
You are in for a great life!
Posted by Retired Knitter at 7:01 PM

Email ThisBlogThis!Share to TwitterShare to FacebookShare to Pinterest
Labels: Tate

He is so cute. Tate will make life interesting for the family. Lucky pup.

Glad you made it there and back safely.
Tate is a great name. He looks like he will surely be pampered. :)

Wow, looks nasty out, think I would have waited to make the trip for better conditions. Glad you made it back safely. Puppies and the training involved takes work...makes me a bit tired thinking about it. Best of luck to all.

That face. Makes my heart melt. He is one lucky and loved pup.

Quite an adventure for you. I hate driving like that, city plus weather. But it was worth it to bring your daughter and this precious puppy together. I hope you get to see him again soon.

Glad you all made it to pick up Tate and back home again, safely. It looks like this little puppy has already stolen your hearts!

So. Cute. !!! And that white toy with the heartbeat is a great idea.

What a cutie. So soft and squishy. I don't know how you contained yourself riding in the back seat with him for 3 hours!

That weather did not look like a picnic... I think little squish ball pup is just absolutely cute!
Cat

OMG, those wrinkles and folds! He is the cutest thing EVER. He will have a long, happy, love-filled life with your family.

Making blog rounds and waving hello. Hope all is well with you; been so long since you've visited.

Elaine to experiment, I changed my blog from embedded comments to pop up window. Would you test it and see if you're able to leave a message and let me know. Thanks.

Thanks for all the visits. Love this little guy to pieces!

Sandy, yes I will visit your blog and see if I can leave a message now.

Cynthia and Sandy and Cat - yes the weather looks dreadful, but we had warm temps for a few days before so the roads and the sidewalks were too warm for the snow to stick.

Becki - I looked forward all week to that 3 hour ride back with him on my lap. And he was so good. No struggling or anything.

Beatrice - that puppy stole our hearts BEFORE we had gone to get him. The pictures from the breeder were the key! And he turned out to be such a wonderful puppy. Easy to train, well behaved, loving.

Making blog rounds and waving hello. Hope all is well.

Tate is SO adorable!! It's wonderful that he is in a loving, caring home. Glad your trip went well.

Making blog rounds and waving hello. Had to return to embedded comments. Just didn't like the other method; so am hopeful since it changed that it might have straighten things out for you.