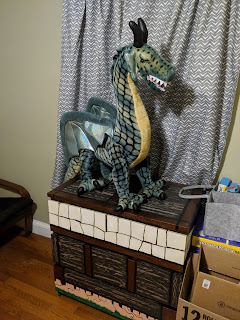 A guardian at the door to my grand daughter's bedroom is this magnificent dragon.  He sits upon "The Luggage," another guardian! (see previous post for an explanation of The Luggage.)

The Dragon was purchased by my son at a toy store near where he works.  The store was going out of business and he got it for a reduced price, but I suspect he would have paid full price.

In person, it is a pretty amazing figure.  Magnificent in his details.


Just check out the wings - an impressive wing span I am sure. 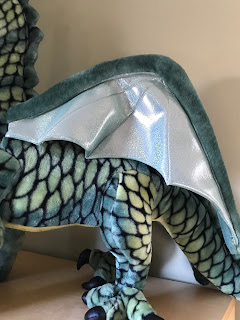 Fearsome teeth!
All the better to eat monsters! 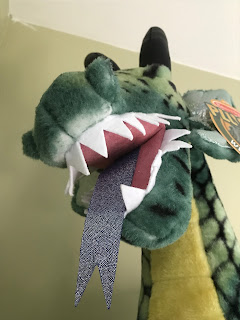 Massive feet - needs a pedicure, I think.
But those nails will rip any monster apart in a Nono-second!! 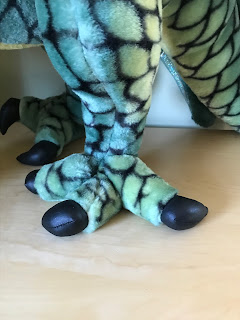 Scales are soft to the touch.  But don't be fooled. This guardian means business!

Some of you might wonder why would we want to give a little girl a jumbo dragon ... even if he is a fine specimen and will serve as an excellent guard.  Well, the short answer is ... dragons are for girls.  Just look at The Game of Thrones TV series (also a series of books.)  That story includes 3 very serious fire breathing dragons and they belonged to a character called The Mother of Dragons - a girl! Ha!

Truthfully, Dragons hold a rather large place of honor in my family.  My husband and a group of his friends play a monthly game similar to the original game of Dungeons and Dragons.  If you aren't familiar with that style of gaming, it is a story based game populated by imaginary characters that are created by those playing the game.  There is no board - but there are dice of various shapes and each person has a character sheet that describes his or her character's skills and attributes.  A 'dungeon master' or game leader - typically my husband - creates the fantasy world with a story line, goals and achievements.  Participants improve their characters' skills and attributes by gaining experience during the game - if they don't die, that is!   It is a game of the mind and the imagination.

The original game of Dungeons and Dragons was created back in the 70s.  Our family and friends have met to play this game or similar versions of this game for all these years.  Our son and daughter-in-law are part of this group - and my son has played with this group since he was probably 7 years old.

So a dragon is a perfectly normal thing to give to a girl whose father and grandfather have devoted so much time to.  Maybe when she is 7 years old, she may desire to pull up two chairs - one for herself and one for her dragon, and join in the game.  And if not, what better guardian could a little girl have than her own personal dragon to scare away the monsters!

And besides,  it doesn't hurt that this dragon is darn cute!

Posted by Retired Knitter at 10:03 PM

I don't like D&D, but I love that dragon and not conforming to gender stereotypes! Bravo!