Turns out I am not the only one who is making things for this new baby girl to our family.

My son has an amazing creative side to his nature.  He has done wood working, leather projects, and recently he has taken up print making.  His most recent project is a chest of drawers he painted for his daughter.  The chest originally came from Ikea, and he painted to look like a fantasy character called The Luggage from Terry Pratchet's Discworld Series of books.

The Luggage is best described as follows:

"The Luggage is a trunk with legs. It is made of sapient pearwood, and is immensely faithful. Its first owner was a tourist called Twoflower, who at the end of The Light Fantastic, gave the Luggage over to Rincewind. It appears to hold many dimensions, and has often swallowed people that have tried to hurt its owner." 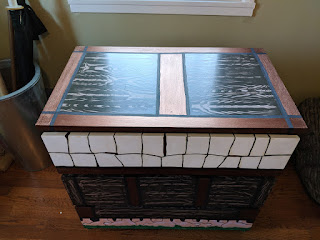 He shared this creation on Facebook - and in the explanation he said The Luggage was created to "protect his baby girl from monsters."  And we all know directly from our own childhoods that monsters do hide under the beds of children if there is no one there to protect them. Looks like this bedroom will be safe from monsters! 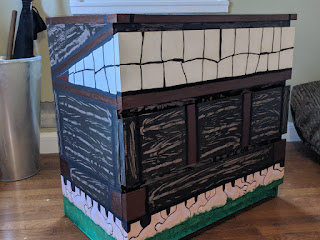 I have included a link below that provides further explanation regarding The Luggage.  If you are not familiar with Terry Pratchet and his Disc World Series you might get a better understanding by checking out this link.  I have read a few of the books and they are great fun. 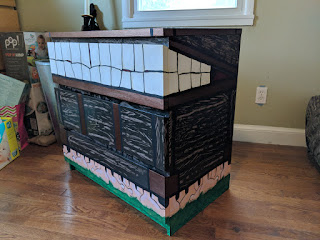 Posted by Retired Knitter at 1:30 AM

Your son is so creative. What a fun The Luggage trunk!

Am confused, luggage? Was it luggage or a box? Whatever, he's sure made a fortress for her. Monsters under beds, always makes me think of the book, There's a Monster Under My Bed: James Howe, David S. Rose. It's such a cute cute book. Have been doing some blog walkng today and found myself here. Always fun to visit new/additional bloggers.